Tilo has been playing drum kit for over twenty five years and has worked with many professional artists including Jimmy Carl Black, Michael Head, Arthur Brown and Ike Willis. He studied jazz in Cologne, Germany and is a graduate of the Liverpool Institute for Performing Arts. He has toured and recorded extensively in Europe with the Muffin Men and in the UK with The Weave, amongst many others. He has also been the drum kit teacher at the University of Liverpool since 2005. He’s been with BeatLife since 2005 and co-delivers weekly workshops and afterschool clubs in three primary schools and has been teaching and mentoring for over ten years.

Tilo prefers to create original music and likes to play any style from Punk to Pop, Latin, Jazz or any other genre, as long as it comes from the heart and soul.

From the age of 15 Mandy has applied herself to the creative arts. She studied music [arrangement, harmony and music theory] for three years at college, playing drum kit as her first instrument. After college she played drum kit with various bands including art house bands with original material and pop / rock style covers bands. She is a graduate in Fine Art from Liverpool John Moores University and continues to be active in Visual Arts having held several exhibitions of her work.

She has taught whole class percussion workshops in Primary schools for over 10 years and has played all over Merseyside, in several European countries and in Africa.

For the last five years Mandy has been playing button accordion, playing traditional Irish music. She can be seen frequenting the weekly Trad sessions in Liverpool with fellow musicians.

She has recently brought together her skillset to devise and deliver music sessions within the Early Years sector, combining a love of drumming with other aspects of music such as singing and harmony.

Mandy has been part of BeatLife for over 10 years and has supported it through teaching and the day to day running of the group. She continues to teach and lead percussion workshops in primary schools and play in Liverpool. 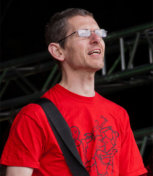 Marty is originally a bass player and is a formative member of popular Liverpool bands The Zeb and The Hat Band. He also runs a small production studio, produces electronic music, and has produced and recorded for many Liverpool artists. He is a regular collaborator with guitarist Neil Campbell and has been teaching guitar and bass guitar for many years.

Marty joined BeatLife in 2010, initially as a parent of a young drummer and has since become a valued member of the team, leading workshops and composing new material for the band (7/8 anyone?). He delivers weekly samba workshops and an afterschool club in Liverpool. He also writes arranges material for and helps to run the BeatLife band.

There are no upcoming events at this time.

We believe that black lives matter, and are committed to equality for all people.